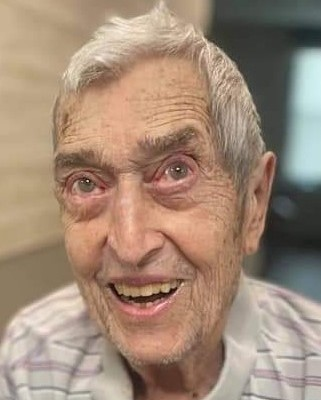 Please share a memory of Raymond to include in a keepsake book for family and friends.
View Tribute Book
Raymond L. Stancher of Middletown, N.Y. a retired Banker with the Bank of New York in Middletown and the Orange County Region passed away on December 30, 2021 in Garnet Health Medical Center in Middletown, N.Y. He was 98. The son of the late Fortunado and Carmela Stancher, he was born on June 13, 1923 in Stambough, Michigan. Ray or "Mr. Daisy" as he was known later in life with a large following of his trips and life adventures on Facebook was a member of the Middletown Elks Lodge 1097 and also participated in the Honor Flight to Washington, D.C. Ray was a veteran of the U.S. Army and served from 1943-1945 and was part of the D-Day Invasion in Normandy, France. He survived the largest seaborne invasion in history and will always be part of the greatest generation. Ray was the widower of Jennie Romanelli Stancher. Survivors include his children Adrienne Marcantonio (Kevin Montagnino) of Middletown, N.Y. and Stephen Stancher (Lisa) of Montana. His sister Dorothy Balma of Nutley, N.J. His grandchildren David Tatarek (Sara Ewing Englestad), Elaine Adams (Joseph Adams), Christopher Tatarek (Renee) and Ross Stancher. His great-grandchildren Aerin Englestad, Madeline Englestad, Alexander Tatarek, Justus Adams, Dominic Adams, Anton Adams and Zelie Adams. He is also survived by his nieces and nephews. As you prepare to attend services please be aware that NYSDOH guidelines require FACIAL COVERINGS while inside the Funeral Home and Church. Visitation hours will be held on Sunday January 16, 2022 from 1-4 P.M. at the Ralston-Lippincott-Hasbrouck-Ingrassia Funeral Home, Inc. 72 West Main St. Middletown, N.Y. A Funeral Mass will be celebrated on Monday January 17, 2022 at 10 A.M. at Our Lady of Mt. Carmel Church 90 Euclid Ave. Middletown, N.Y. with Military honors following the Mass. Burial will be in St. Joseph Cemetery Middletown, N.Y. at the convenience of the family. Arrangements by Ralston-Lippincott-Hasbrouck-Ingrassia Funeral Home, Inc. 845-343-6023 or www.ocfuneralhomes.com
To plant a beautiful memorial tree in memory of Raymond Stancher, please visit our Tree Store
Sunday
16
January

Share Your Memory of
Raymond
Upload Your Memory View All Memories
Be the first to upload a memory!
Share A Memory
Plant a Tree