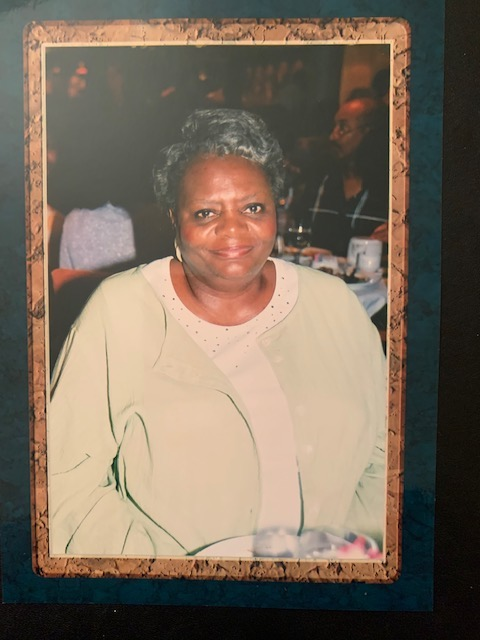 Please share a memory of Iris to include in a keepsake book for family and friends.
View Tribute Book
Iris Christine Harper was born in The Bronx, NYC on December 23,1944 to parents Romeo and Ruth Harper. Romeo and Ruth originally migrated to New York from the southern states of Virginia and North Carolina respectively. Iris was named after a very kind nurse who attended to Ruth at the hospital where Iris was born. Iris was the youngest of three siblings. Her brother Ronald was the oldest child and her brother Lawrence (affectionately known among the family as “Pee-Wee”), was the middle child. Ruth Harper died when Iris was only 8 years old, leaving her father Romeo to care for his three children on his own primarily, but with the occasional assistance of Iris’ maternal grandmother Neda Johnson. Romeo eventually secured permanent work in a grocery store in Harlem, NYC and spent many years working in that store supporting himself and his family. Over the years, Romeo Harper moved his family to Brook Avenue in the Bronx, during Iris’ years in Elementary School. As it is well known, the Bronx can be a bit of a tough place to live so Iris became very well adept at physically defending herself against the bullies in the neighborhood or at school---both boys and girls:-). Romeo would later move the family to Fox Street, also in the Bronx. During Iris’ early teenage years she attended Theodore Roosevelt High School in 1958 and later graduated. Iris had many fond and humorous memories of attending Roosevelt High School. She occasionally expressed the fact that she went to high school with a famous alum that she knew quite well, who was Ms. Vy Higgensen. Vy Higgensen is a well-known playwright who created the musical entitled “Mama I want To Sing”. After completing High School, Iris discovered that she was going to become a mother. In 1964, her daughter Geraldine Harper was born to parents, Iris Harper and James Goodwin. Shortly after Geraldine was born, Iris realized she needed work to care for her infant daughter. She obtained a job at Shoecraft which was an upscale, specialty shoe store that featured large sized shoes for tall women, located on 5th Avenue in Manhattan. Iris worked there for approximately 5 years and was later promoted into a supervisory position within their warehouse department. Iris enjoyed the opportunity of watching various celebrities come into the store to purchase shoes on a frequent basis. In 1969 Romeo Harper re-married so as a result, Iris moved with her young daughter Geraldine to Vyse Avenue in the Bronx, where she and her daughter remained until 1977. Shortly before Iris moved to Vyse Avenue, she secured a clerical position with the Health and Hospitals Corporation of the City of New York. While employed at the Corporation, Iris worked within the Patient Information and Admitting departments of Lincoln Hospital and eventually North Central Bronx Hospital. Iris worked within the Health and Hospitals Corporation for 26 years. Iris remained in the Bronx for years, later relocating to Commonwealth Ave and then lastly, she lived in the Fordham Hill area until the fall of 1991 when she moved upstate, to the town of Newburgh NY with her daughter Geraldine. Iris retired from the NYC Health and Hospitals Corporation in 1996 and in subsequent years, took on various part-time clerical positions. After Geraldine moved to Rockland County NY in 2003, Iris moved to Washingtonville NY, and she finally settled in Otisville NY where she remained until she went home to be with our Lord. Iris and her daughter Geraldine became born-again Christians in August 1988 at Madison Square Garden during an Evangelistic Crusade held by Dr. Frederick K.C. Price. Iris and Geraldine became official members at Redeeming Love Christian Center in 1991. Iris faithfully served under Deacons Alyce and Lee Thomas in the Communion Ministry for a number of years and, she frequently supported Mrs. Berniece Perkins by working within the Volunteer Ministry as well. Iris was a tremendous blessing to her friends and family indeed. Her very kind heart, sharp wit, excellent sense of logic and her profound sense of humor greatly warmed the hearts of those who knew and loved her. Iris was also a very courageous woman as well, often facing adversity throughout her life with dignity and grace. It was very difficult for those who really knew Iris not to laugh at her funny jokes or witty comments—the ability in making people laugh is a wonderful gift indeed. Iris was also a music lover especially during her childhood and young adult years, she enjoyed listening and dancing to the tunes of her favorite Motown artists and was indeed a true “Motown Fan.” Iris also enjoyed watching movies, reading, she loved basketball in general and was a devoted Knickerbocker Fan as well. She enjoyed traveling and traveled as often as she could. Iris is survived by her daughter Geraldine, cousins Lisette Blake and Sheri Ford and her family, along with a few distant relatives. It’s an extreme understatement and it’s certainly needless to say that Iris will be deeply missed.
To plant a beautiful memorial tree in memory of Iris Harper, please visit our Tree Store
Tuesday
20
July

Share Your Memory of
Iris
Upload Your Memory View All Memories
Be the first to upload a memory!
Share A Memory
Plant a Tree