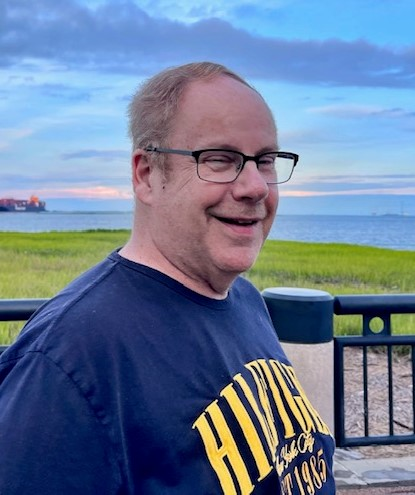 Please share a memory of Patrick to include in a keepsake book for family and friends.
View Tribute Book
Patrick James Leahy, 56, of Hampstead, North Carolina, a retired Sergeant of the NYPD, passed away on October 9, 2021. Pat was a wonderful husband and a loving father and grandfather. Pat is survived by his loving wife Nora, his two children Thomas and Jacqueline, as well as his granddaughter Aliya Torres. Pat was born in the Bronx, NY to the late Patrick and Constance Leahy on October 4, 1965. His first job was selling ices at the New York Botanical Garden, and he moved up in the world when he started working in the shoe department at Sears. There, he met his wife Nora, who he jokingly always said couldn't resist how he looked in his (not so good looking) shoes. Pat and Nora were married on May 4, 1991 and were married for 30 wonderful years. Pat graduated from Iona College with a degree in Political Science in 1989, and then attended the NYPD Police Academy in 1990. He became a sergeant in 1999 and retired from the Bronx Task Force in 2006. He loved his career and the wonderful people he met working on the job. Pat was a creature of habit. You could find him watching a John Wayne movie or rewatching an episode of American Pickers for the 20th time. He enjoyed his weekend trips to Gettysburg and was happy to finally visit Charleston this past summer. Pat enjoyed many things in life, but here are just a few: his pets, Nora's Norwegian pancakes & flan, history, Jersey Mike's (if you know, you know), the supernatural, John Wayne, "The Andy Griffith Show", "The Godfather", "Jaws", trains, and of course a mean sale on 3-wick candles at Bath and Body Works. Pat and his wife recently moved to Hampstead, NC in 2021 to enjoy the coastal lifestyle in their retirement. Despite not spending much time in his new home state, Pat was incredibly happy in the last few months of his life. He went on boat rides with his friend Kevin, went berry picking with his granddaughter Aliya, and spent a great deal of time with his family during his last summer on earth. Patrick was truly a gem, or "such a card" as he would say. He was extremely kind and cared about his friends and family. Though distance may have prevented Pat from seeing friends and family, he certainly never forgot about them. His jokes and ridiculous facial expressions will be missed, as well as his presence. He will be greatly missed and loved by all who have encountered his kindness and laughed from his humor. Visitation hours will be held on Monday October 18, 2021 from 2-4 and 6-8 P.M. at the Ralston-Lippincott-Hasbrouck-Ingrassia Funeral Home, Inc. 72 West Main St. Middletown, N.Y. A Funeral Mass will be celebrated on Tuesday October 19, 2021 at 10 A.M. in Our Lady of Mt. Carmel Church in Middletown, N.Y. Burial will follow in Gate of Heaven Cemetery Hawthorne, N.Y. In lieu of flowers, donations may be made to any animal shelter in Pat's memory. Arrangements by Ralston-Lippincott-Hasbrouck-Ingrassia Funeral Home, Inc. 72 West Main St. Middletown, N.Y. 845-343-6023 or www.ocfuneralhomes.com
To plant a beautiful memorial tree in memory of Patrick Leahy, please visit our Tree Store
Monday
18
October

Share Your Memory of
Patrick
Upload Your Memory View All Memories
Be the first to upload a memory!
Share A Memory
Plant a Tree