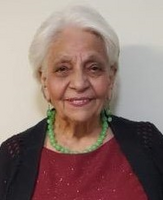 Narcisa Colon of Middletown, New York, a longtime resident of the area, passed away on Saturday September 3, 2022. She was 89. The daughter of the late Manuel Ortega and Paula Sanchez, she was born on October 29,1932 in Puerto Rico. She was a childcare provider in the Middletown area for many years. Narcisa served as a Pioneer for the Jehovah Witness and was a longtime member of the Middletown South Jehovah Witness. She was the widow of Juan Colon Rivera. Survivors include her children Juana Compos (Lauro) of Goshen, N.Y. Clara Colon of Middletown, N.Y.; Gerardo Colon (Marlene) of Kissimmee, FL.; Moises Colon (Rosalie) of Middletown, N.Y.; Sylvia Contes (Richard) of Middletown, N.Y.; Estelle Lebar (Dale) of Derby, Kansas. She is also survived by her sister Dominga Ortega of Puerto Rico and her grandchildren, great-grandchildren and great-great grandson and nieces and nephews as well as her many brothers and sisters of the Middletown South Jehovah Witness. She was predeceased by her daughter Vivian Colon. Her husband Juan and several brothers and sisters. Visitation hours will be held on Thursday September 8,2022 from 4-7 P.M. at the Ralston-Lippincott-Hasbrouck-Ingrassia Funeral Home, Inc. 72 West Main St. Middletown, N.Y. A Service will be held on Thursday at 5:30 P.M. at the Funeral Home and will be livestreamed at the following link: https://my.gather.app/remember/narcisa-colon Memorial contributions may be made to the American Cancer Society. Arrangements by Ralston-Lippincott-Hasbrouck-Ingrassia Funeral Home, Inc. 845-343-6023 or www.ocfuneralhomes.com