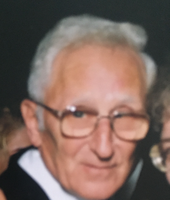 Vincent C. Panaro of Middletown NY, a retired produce manager for Lloyd's supermarket in Middletown NY and lifelong resident of the area, passed away March 20, 2022 at home surround by his loving family. He was 87. The son of the late Pasquale Panaro and Josephine Diana Panaro, he was born September 23, 1934 in Middletown, New York. Survivors include his son Patrick Panaro and his Daughter Cathy-Jo Beairsto and husband Chad Beairsto all of Middletown NY. His beloved Grand Children Andrew V. Velazquez, Nicholas L Velazquez and Phoebe Panaro and many adopted neighborhood children nieces and nephews. He was predeceased by his Loving wife Catherine Panaro, brothers Angelo Panaro, Louis Panaro and Joseph G Panaro. A family statement reads: Vincent was a loving caring Husband, Father, Grandfather and friend to so many. He had a love for harness racing and an avid bowler. It was at the bowling alley that he had his first date with the woman that would become the love of his life, the woman he would spend 55 years of marital bliss with. His wife passed away one day before him. Vincent couldn't bear the thought of being without his beloved Catherine. He loved to tell stories to the younger generations that will be missed so deeply. He was a US Army Veteran, and a Member of the Elks Lodge 1097 in Middletown NY. He will be missed by all that had ever interacted with him. Visitation hours will be held on Wednesday March 23, 2022 from 4-7 P.M. at the Ralston-Lippincott-Hasbrouck-Ingrassia Funeral Home, Inc. 72 West Main St. Middletown, N.Y. A Funeral Mass will be celebrated on Thursday March 24, 2022 at 11 A.M. in St. Joseph Church in Middletown, N.Y. Burial will be in St. Joseph Cemetery in Middletown, N.Y. Arrangements by Ralston-Lippincott-Hasbrouck-Ingrassia Funeral Home, Inc. 845-343-6023 or www.ocfuneralhomes.com