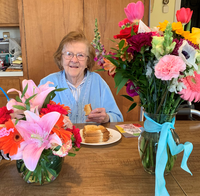 Regina "Jean" Deserto of Middletown, a retired nurse/teacher for the Middletown School District and a longtime resident of the area, passed away on January 8, 2022 at Valley View Rehabilitation Center in Goshen, N.Y. She was 92. The daughter of the late John and Ellen McCarthy Sullivan, she was born on March 20, 1929 in Hopkinton, New York. She was a member of Our Lady of Assumption Church in Bloomingburg, N.Y. The family would like to thank the staff of Valley View for their wonderful care of Jean during her stay. They would also like to thank Marge Deserto, Linda and Joe Deserto and Bonnie Heib for all your help and support. Jean was the widow of Joseph Deserto. Survivors include her sons Joseph Deserto Jr. of Middletown and John Deserto and his companion Robin of Hamlin, N.Y. Her grandchildren Anthony Deserto (Raisa); Hannah Deserto (Anthony) and Rebecca Deserto (Matthew). She is also survived by her great-grandchildren Julia; Joseph and Antonio as well as many nieces and nephews. She was predeceased by her brothers Donald and Thomas Sullivan and several nieces and nephews. As you prepare to attend services, please be aware that NYSDOH requires facial coverings while indoors at the Funeral Home and the Church. Visitation hours will be held on Saturday January 15, 2022 from 9A.M.-10:30 A.M. at the Ralston-Lippincott-Hasbrouck-Ingrassia Funeral Home, Inc. 72 West Main St. Middletown, N.Y. A Funeral Mass will be celebrated on Saturday January 15, 2022 at 11 A.M. at Our Lady of Assumption Church in Bloomingburg, N.Y. Burial will be held at the convenience of the family. Memorial contributions may be made to the Valley View Center for Rehabilitation in Goshen, N.Y. Arrangements by Ralston-Lippincott-Hasbrouck-Ingrassia Funeral Home, Inc. 845-343-6023 or www.ocfuneralhomes.com