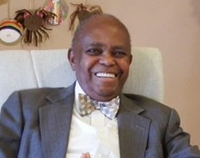 William "Bill" Lewis of New Hampton, New York, a retired engineer with Blue Cross Blue Shield in Middletown, N.Y. passed away on January 1, 2022 in Garnet Health Medical Center. He was 83. The son of the late Walter and Dellie Samuel Lewis, he was born on December 20,1938 in Antigua. Bill was a longtime member of St. Paul's Episcopal Church in Chester, N.Y. Survivors include his wife Iva Lewis at home. His children Trevor Reynolds; Walter Lewis; William Lewis Jr.; Melvin Lewis; Lorraine Davis and Arlene Joseph. His brothers Vincent Lewis and Walcot Lewis and his sister Roma Lewis. He is also survived by his fifteen grandchildren and five great-grandchildren and nieces and nephews. He was predeceased by his daughter Cavelle Lewis. Visitation hours will be held on Saturday January 8, 2022 from 10 A.M.-12 P.M. at the Ralston-Lippincott-Hasbrouck-Ingrassia Funeral Home, Inc. 72 West Main St. Middletown, N.Y. Due to COVID-19 Restrictions Facial coverings are required when inside the building. A Funeral Service for the Family will be held on Saturday January 8, 2022 at 1 P.M. at St. Paul's Episcopal Church 101 Main St. Chester, N.Y. The Services will be livestreamed at: https://my.gather.app/remember/william-bill-lewis Burial will be in Floretta Gardens in Potters, Antigua Arrangements by Ralston-Lippincott-Hasbrouck-Ingrassia Funeral Home 845-343-6023 or www.ocfuneralhomes.com