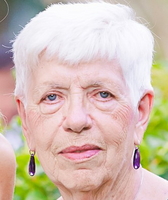 Grace A. Klein of Middletown, N.Y., passed away on November 16, 2021 in Sapphire Nursing and Rehab at Goshen. She was 90. The daughter of the late Lambertus Jan and Henderika Bogema Smit, she was born on September 20, 1931 in the Netherlands. She was a retired TA at the Middletown Psychiatric Center in Middletown, N.Y. and after her retirement she was a caregiver for Mrs. Ottaway in Hamptonburgh, N.Y. for over a decade. Mom was a proud survivor of Breast Cancer. She was an avid walker and loved going to her walking club at the Galleria Mall. She was a member of the Mulberry Seniors in Middletown, N.Y. Grace was the widow of Jacob Klein. Survivors include her children Jacob (Beth) Klein of Goshen, N.Y.; Henrietta "Rita" Klein and Margaret Klein (Ken White) all of Middletown, N.Y. Her grandchildren Kim Klein; Emily Beard (Ethan); Kristin Steele (Dan); Sarah Klein (Andrew Knauer) and Jacob Klein (Jess). Her great-grandchildren Finley Beard, Samuel Beard and Theodore Knauer. Her brothers Hendrik Smit (Mardy), Klaas Smit (Nancy) and Frederick Smit. She was predeceased by her siblings Henderikus Smit, Kees Smit, Derk Smit and Ann Smit and her sisters-in-law Karen Smit, Josephine Smit and Barbara Smit. Visitation hours will be held on Sunday November 21, 2021 from 2-5 P.M. at the Ralston-Lippincott-Hasbrouck-Ingrassia Funeral Home, Inc. 72 West Main St. Middletown, N.Y. Funeral Services will be held on Monday November 22, 2021 at 11 A.M. at the Funeral Home. Burial will follow in the Wallkill Cemetery Phillipsburg, N.Y. Memorial contributions may be made to the Mulberry Senior Center in Middletown, N.Y. Arrangements by Ralston-Lippincott-Hasbrouck-Ingrassia Funeral Home, Inc. 845-343-6023 or www.ocfuneralhomes.com