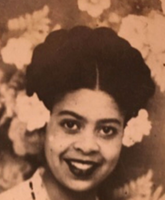 Gloria F. (Ross) Hicks died on October 5, 2021 at home with her loving daughters by her side. She was 93. She was a lifelong resident of Chester, N.Y. The daughter of the late Frank Ross Jr. and Jessie VanDyke Ross, she was born on December 27, 1927. Gloria was predeceased by her husband of over 50 years Albert Hicks. Her brother Walter Ross and granddaughters Rosanna Powell and Sarah Hicks and her daughter in law Moon Hicks. She was a member of the New Life Worship Center in New Hampton, N.Y. Survivors include her children Brenda Hicks-Hush (Elworth) of New Paltz, N.Y. Craig Hicks (Debi Missilli) of Chester, N.Y. Floyd Hicks of Burlingham, N.Y. Sheila Hicks-Kornegay of Middletown, N.Y. Donna Hicks of Liberty, N.Y. and Lisa Hicks of Chester, N.Y. She is also survived by her grandchildren and great-grandchildren and great-great grandchildren and her nieces and nephews. Visitation hours will be held on Friday October 15, 2021 from 10-12 Noon with a funeral service at 12 Noon at the Ralston-Lippincott-Hasbrouck-Ingrassia Funeral Home, Inc. 72 West Main St. Middletown, N.Y. Burial will be held at the convenience of the family. In lieu of flowers memorial contributions may be made to the Chester Historical Society 47 Main St. Chester, N.Y. 10918 or the New Life Worship Center P.O. Box 217 Chester, N.Y. 10918.