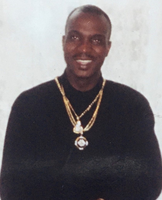 Godwin Osabouhien Edosomwan, AKA "George" Gone too soon age 59 went home to meet the his Lord and Saviour Jesus Christ on Monday, July 13th, 2020 at the National University Hospital Center in Cotonou, Benin after a courageous battle with cancer. George was born on January 6th, 1961 in Edo state, Benin to Ehigie and Hannah Edosomwan. He was the youngest of five children. He attended Oghada grammar school in Benin city and later studied network engineering at the Chubb Institute in New York City. He migrated to the United States in 1991 where he lived with his wife Cecilia Okungbowa and their five children in the Bronx, New York. He later moved to Tema, Ghana where he owned a successful auto parts business. He lived here up until his time of death, George is survived by his five children and one grandchild. Besides spending time with family and friends and running a successful business, George loved reading. He was an avid reader in his youth, he learned how to read by practicing and writing the names of prominent figures. Aside from English, he taught himself to speak French and Spanish fluently. In his leisure time, he loved sitting in nature or meditating on the beautiful beaches of Ghana. In the latter part of his life, he was an avid believer in God. Often times praying for people. A friend of his told a story of when he prayed for a person who suffers with mental illness. George's prayer helped usher the man out of a severe nervous breakdown. Many stories like this were told of him by the people closest to him. Friends and family remember George as: " giving, encouraging, compassionate, loving and always happy". He was known as a "go-getter" who was not easily dismayed from his dreams. The last status George Sr. Posted on his WhatsApp page was a true testament to is believes and how he lived his life. The status is quoted as saying: "God above all". Donations to the family can be made here: GoFundMe: medium=copy_link&utm_source=customer&utm_campaign=p_lico+share-sheet+exp WdC. Cash app: $Godwinfuneral Your support is warmly welcomed and greatly appreciated.