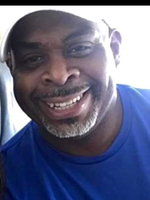 Antonio Manuel Garcia Middletown, New York Antonio Manuel Garcia of Middletown, N.Y. passed away on Tuesday June 23, 2020 in Middletown, N.Y. He was 57. Antonio was born on June 13, 1963 in New York, New York, the son of the late Manuel and Rose M. Garcia. An unforgettable force to be reckoned with, he was known as a gentle giant. His smile and laughter lit up a room and once you were in his "inner circle" you felt secure and untouchable. The best father and pop-pop and sibling a person could ask for. His clumsiness in breaking things and blaming it on others, making a five minute story into a miniseries, the dimples and his loud laughter will be forever missed. He was always told that you can't hide as the smell of his cologne entered the room before him. Survivors include his fiancé Joanna Henderson. His four children Aerial Garcia, Maria Pierre, Eric Garcia and Rob Henderson. His four siblings Victor M. Garcia, Victoria M. Garcia, Armando M. Garcia and Ivonne Marcano. He is also survived by his grandson Julian M. Faust and his nieces and nephews. He was predeceased by his mother Rose M. Garcia and his father Manuel Garcia and beloved fur baby Jazz. Visitation hours and services will be held on Thursday July 2, 2020 from 2-4 P.M. at the Ralston-Lippincott-Hasbrouck-Ingrassia Funeral Home, Inc. 72 West Main St. Middletown, N.Y. Due to NYS Dept. of Health Guidelines FACIAL COVERINGS ARE REQUIRED for all attendees and there are also attendance limitations in the building. Social distancing must be practiced within the building and outside the building in accordance to the State guidelines. Burial will be held at the convenience of the family. In lieu of flowers the family asks that everyone be good to one and other. Arrangements by Ralston-Lippincott-Hasbrouck-Ingrassia Funeral Home, Inc. 343-6023 or www.ocfuneralhomes.com.